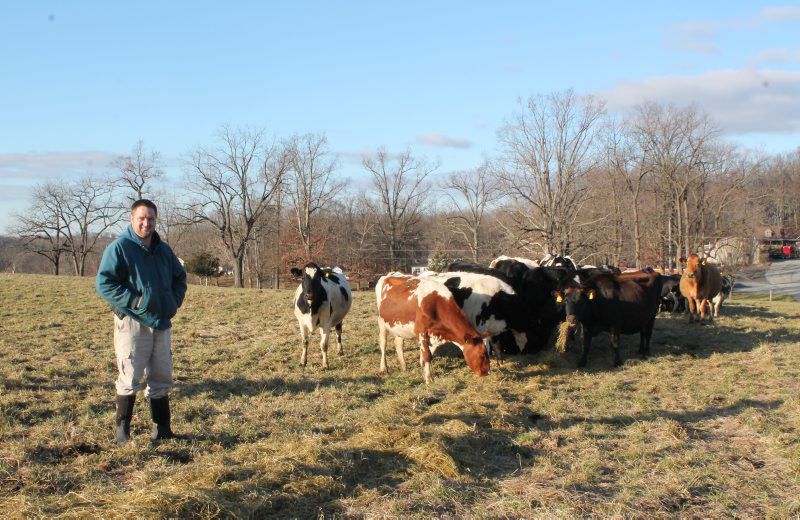 admin
in In the News

KINZERS, Pa. — It’s not easy to succeed with grass-based dairying. “It is a privilege that you earn,” said dairy farmer Dwight Stoltzfoos. “It ups the ante of knowing how to manage the pastures all the more. That’s the key.”

Stoltzfoos and his father, Roman, operate Spring Wood Dairy as part of their Spring Wood Organic Farm in Kinzers.

They milk a crossbred dairy herd. Milking is winding down for the season as the herd heads to dry off. Their goal is to maximize milk production when the best forages are available.

Their move to a forage-only management program was a gradual process. Farmers cannot just flip a switch and move overnight from a ration that includes grain to one without. It can be difficult to balance out forage variabilities without grain and corn silage.

“Cows like predictability. That is what corn and corn silage do,” Stoltzfoos said. “There is not much variation from one grain truckload to the next. It’s the variability of the forage, that’s the challenge. It’s the up and down of that.”

The family converted to certified organic dairying in the 1990s. Stoltzfoos said his father was one of the first dairy farmers to make the switch.

“Organic is old hat for us” because of that 20 years of experience, he said.

The family had started cutting back on the grain as organic grain prices climbed in the late 2000s. When prices became too high, the Stoltzfooses moved to a forage-only ration.

Spring Wood Dairy joined 11 other Organic Valley dairy farms in December to create a route from Virginia to Pennsylvania for the company’s Grassmilk brand.

The route starts in Dayton, Virginia, and ends in Myerstown, Pennsylvania. The milk is then shipped to Organic Valley’s bottling plant in New York state.

In addition to being USDA Certified Organic, Grassmilk cows are 100 percent grass-fed, eating only fresh, organic grasses and dried forages, such as hay. They are not fed supplemental grains, such as corn or soybeans.

When not on pasture, the cows are milked twice a day in a double-10 Dairymaster New Zealand-style swing parlor. The farm has a pack barn and barnyard for the cattle during inclement weather. When not grazing, the cows are fed at an outdoor feed bunk.

Stoltzfoos said the farm receives a bonus from the cooperative for keeping the cows on a forage-only diet.

The herd is managed on a seasonal basis. Right now, the farm’s cows have begun to dry off in earnest in preparation for the spring calving season in March.

“It fits so well with grass-fed. We utilize the best grass for milk production. You can’t produce milk cheaper than when you have spring grass,” Stoltzfoos said.

Fine-tuning the pasture and the herd’s genetics helps increase milk production. The family did see production drop while moving off grain, but since then production has been climbing year after year.

The crossbred herd is based on New Zealand Friesians but has evolved through breeding with Jersey and Norwegian Reds. Stoltzfoos said he likes that breeding mix for its grazing performance.

Farmers in a conventional barn will “push up feed” to encourage cows to eat. Stoltzfoos’ pushup is opening up a new section of pasture for the cattle.

Grazing charts hang in his office to track which cows have grazed where through a growing season.

He monitors the pasture stands carefully. If one is up for replacement, it will become a “sacrifice pasture” for the dry cows through the winter, then be planted in the spring with a summer annual forage, grazed down again and reseeded in the fall.

The seed mix will have at least 10 plant varieties. The family works with King’s AgriSeeds to develop a blend that meets its goals for the renovated pasture. The blend will have a ratio of 60 percent grass to 40 percent legumes.

“The more variety the better,” Stoltzfoos said. “A good grass-fed cow likes a good balance.” He said he’s found as many as 70 plant varieties in a well-established pasture.

To make the whole system work, the pastures are reserved for the milking herd. “We push everything off farm that does not go through the parlor,” Stoltzfoos said.

The heifers, for instance, are shipped to a heifer specialist in central New York state. “We do a herd swap every year,” taking the weaned calves to the heifer farm and bringing bred heifers, Stoltzfoos said.

The first 60 heifers born after the season begins in March will be retained. Those born after that or out-of-season will be sold.

A mix of haylage, hay and baleage is fed as a total mixed ration to help manage pasture variability. “We call it a TMR although there is not any grain in it,” Stoltzfoos said.

The volume fed at the bunk depends on the season and pasture production. The goal is to have the cows get as much nutrition from the pasture as possible, but that has to be balanced with pasture health and forage quality.

The farm does purchase some forages, but Stoltzfoos said he is focused on feeding homegrown forages as much as he can.

Calves are grouped with nanny cows shortly after birth. Each nanny cow will have two to three calves. They are kept in group pens for a short period to encourage maternal bonding.

The calves and nanny cows are then moved to a rental farm where they live on pasture. The nannies’ milk helps to keep the calves growing as they learn to graze.

Many of the cows selected for this nanny group have had some challenges during previous lactations and are under consideration for culling.

“Calves have to be started right,” especially since there is not a starter grain available, Stoltzfoos said. The calves will have been dehorned and tested for the A2 gene before they head to pasture.

About 50 percent of the calves are A2A2, and the rest are A1A2. A2A2 genetics means the cows produce only the A2 type beta casein protein.

Some research has shown A2A2 cow’s milk to be easier to digest than A1 milk. Stoltzfus said calves with the A2A2 genes sell at a premium.

The 20 cows and 55 calves in the nanny group are moved to pasture in April. “I like seasonal because we focus on that one thing,” Stoltzfoos said. For instance, the calves arrive before spring field work begins.

The farm has a private label yogurt that’s processed by King’s Creamery in Lancaster and sold through the Stauffers of Kissel Hill and Darrenkamp’s grocery chains.

Pitango Gelato uses the farm’s processing plant to make a gelato sold in the Washington, D.C., area using the farm’s eggs and milk.

About 10 percent of the farm’s milk is sold through these specialty product lines.

There is no set formula for success in dairying. Stoltzfoos focuses on maximizing the use of his pastures. Other organic dairy farmers might take a minimalist approach.

“What I have observed,” Stoltzfoos said, is “it’s a tightrope balance.” Each farmer has to come up with a management blend that works best for his farm.

Talk Around the Farm